Why You Should Buy a Laser Engraver for Your Shop 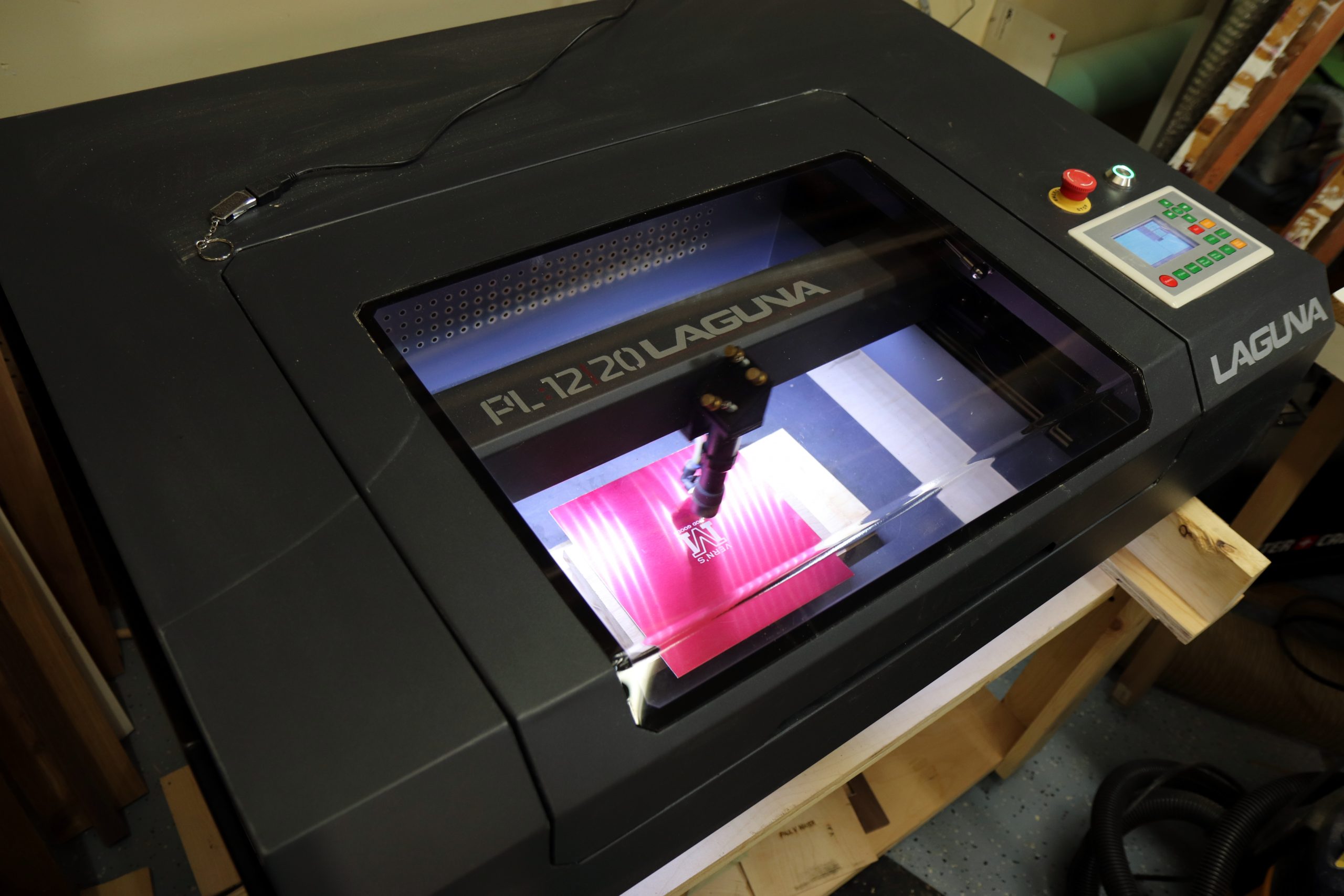 Woodworking businesses are now increasingly offering the option to customize a purchase by adding a name, image, or sentimental phrase to a project. This type of personalization does a couple of things: it differentiates the item, making it more special for the recipient, and it increases its value for the maker. For example, perhaps a $30 cutting board can be sold more easily and might fetch an extra $10 – $15 for the customization.

If you’re a hobbyist, when you think about the tool arsenal that you want t o assemble in your woodworking shop, a CO2 laser engraver probably falls into the “nice to have” category.

But I’ll qualify that a bit more and say it’s very nice to have. If you’re running a custom woodworking business from your shop, it’s possible that a laser engraver might be inching toward the “must have” category when it comes to competitive advantage and profitability.

I recently added a 40 watt CO2 laser engraver (Laguna 20|12) to my tool arsenal. In just a couple months, I’ve completed a wide range of cutting and engraving projects with the machine.

I’ve been pleased with the relatively short learning curve, although my experience suggests that a good comfort level with computer software is a prerequisite. The capabilities that this technology adds to my shop are remarkable, and I feel as though I’m just scratching the surface of what it can do.

How Does a Laser Engraver Work? 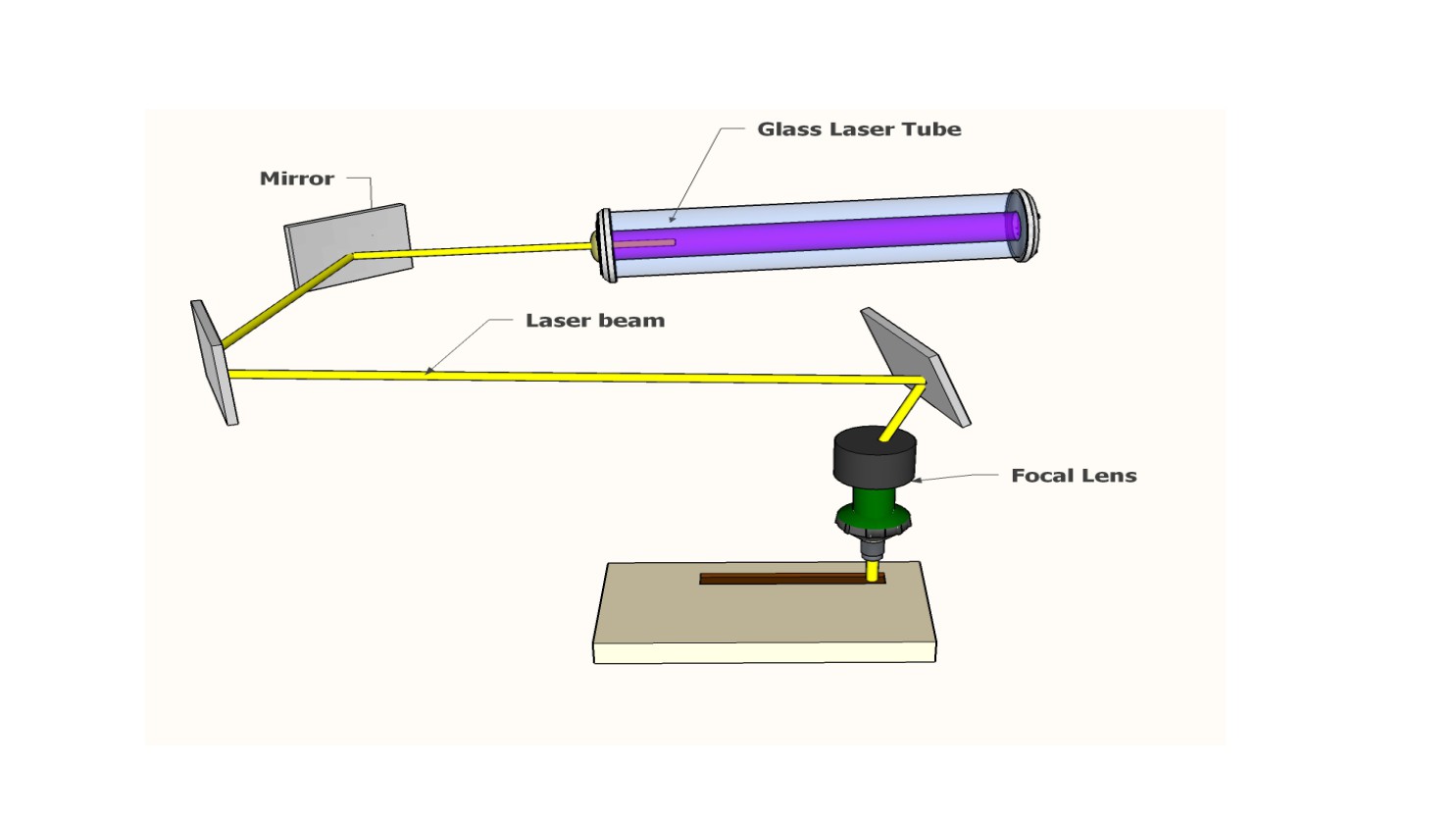 The term “laser” stands for Light Amplification by Stimulated Emission of Radiation. A CO2 laser feeds an electrical charge into a tube filled with carbon dioxide, and the excited gas outputs a concentrated light beam that’s used to vaporize material. The laser is controlled by a robotic arm that plots its course over an X/Y axis grid.

The user controls the laser’s path by providing artwork from a computer, using specialized software (which usually comes with the laser engraver) to lay out the artwork and format it for the specific engraver used.

To control depth of cut, the operator has two variables that can be adjusted. The first is the speed of the robotic arm, which can move quickly for lighter surface engraving or more slowly for deeper work such as cutting. The other variable that can be adjusted depending on the material and the desired effect is the percentage of power that will be used for a given operation. Cutting ¼” MDF requires a much higher intensity than light etching on paper, for example, so it will be important to make the necessary adjustments for each project.


What Can You Do With a Laser Engraver?

There is a long list of materials that can be cut and, depending on the power of the machine, even more materials that can be engraved using a CO2 laser engraver. Wood and processed wood products such as plywood, MDF, particle board, melamine, etc. are all great candidates for cutting and engraving. But you can also engrave on a myriad of other materials such as glass, acrylic, coated metals, rubber, cork, leather and ceramic. I’ve created projects on many of these materials, and after some experimenting to dial in the right power and speed settings I’ve been able to produce some great results. Some examples include: 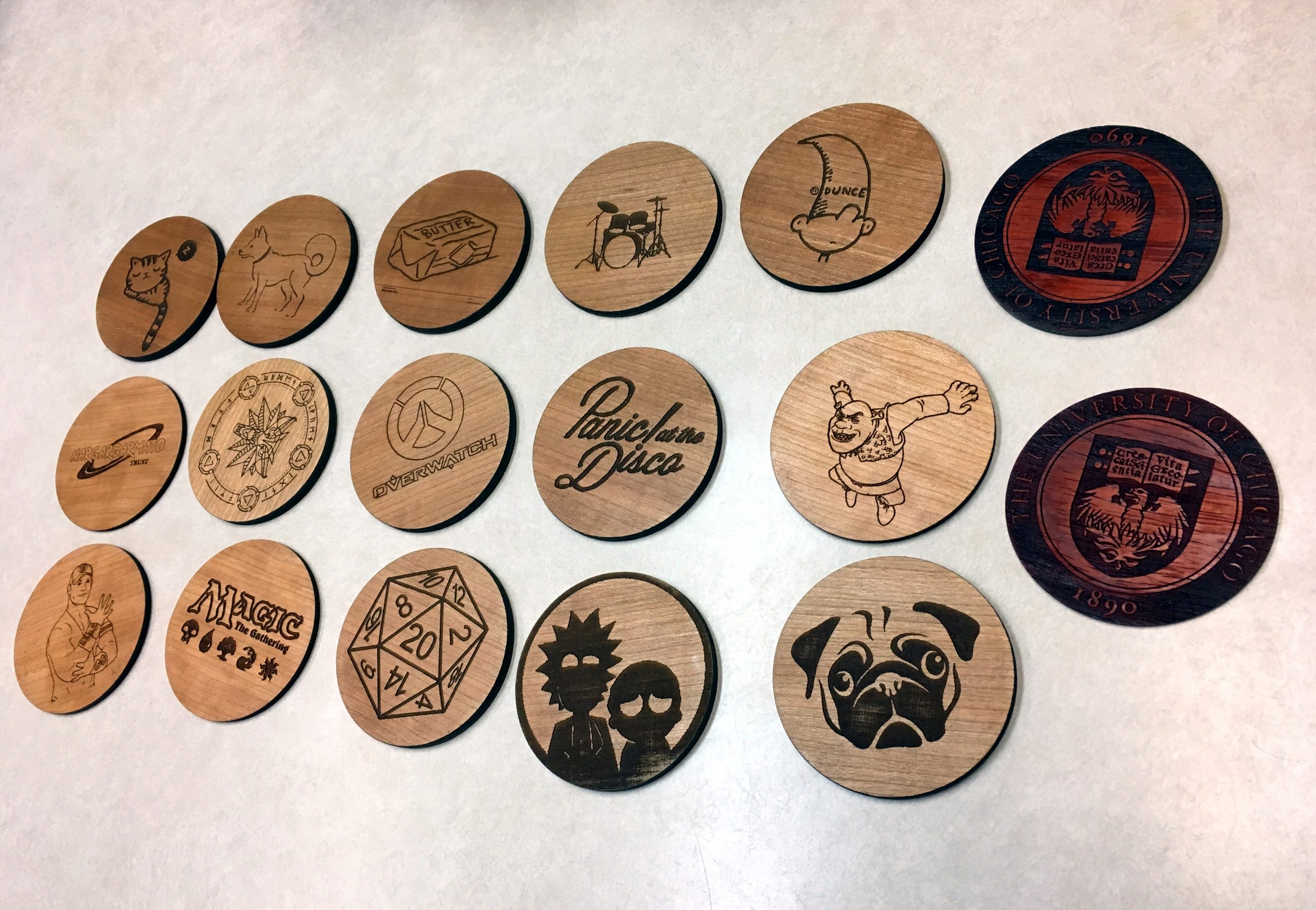 I’ve experimented with several species of hardwood and softwood, both solid wood and veneer, and found all of them to work extremely well for both cutting and engraving. With my 40-watt laser, I’m able to cut up to ¼” thick wood with great precision, which makes it fun to make things like key chains and coasters because I can engrave the image and cut out the shape in a single setup. I can also set up to produce as many items as will fit in the 20”x12” production area, which means I can set up a production run, walk away and come back later to find any number of items engraved and cut out, ready for a light sanding and some finish. I love having it running while I’m working on other projects in the shop — it makes me feel doubly productive. 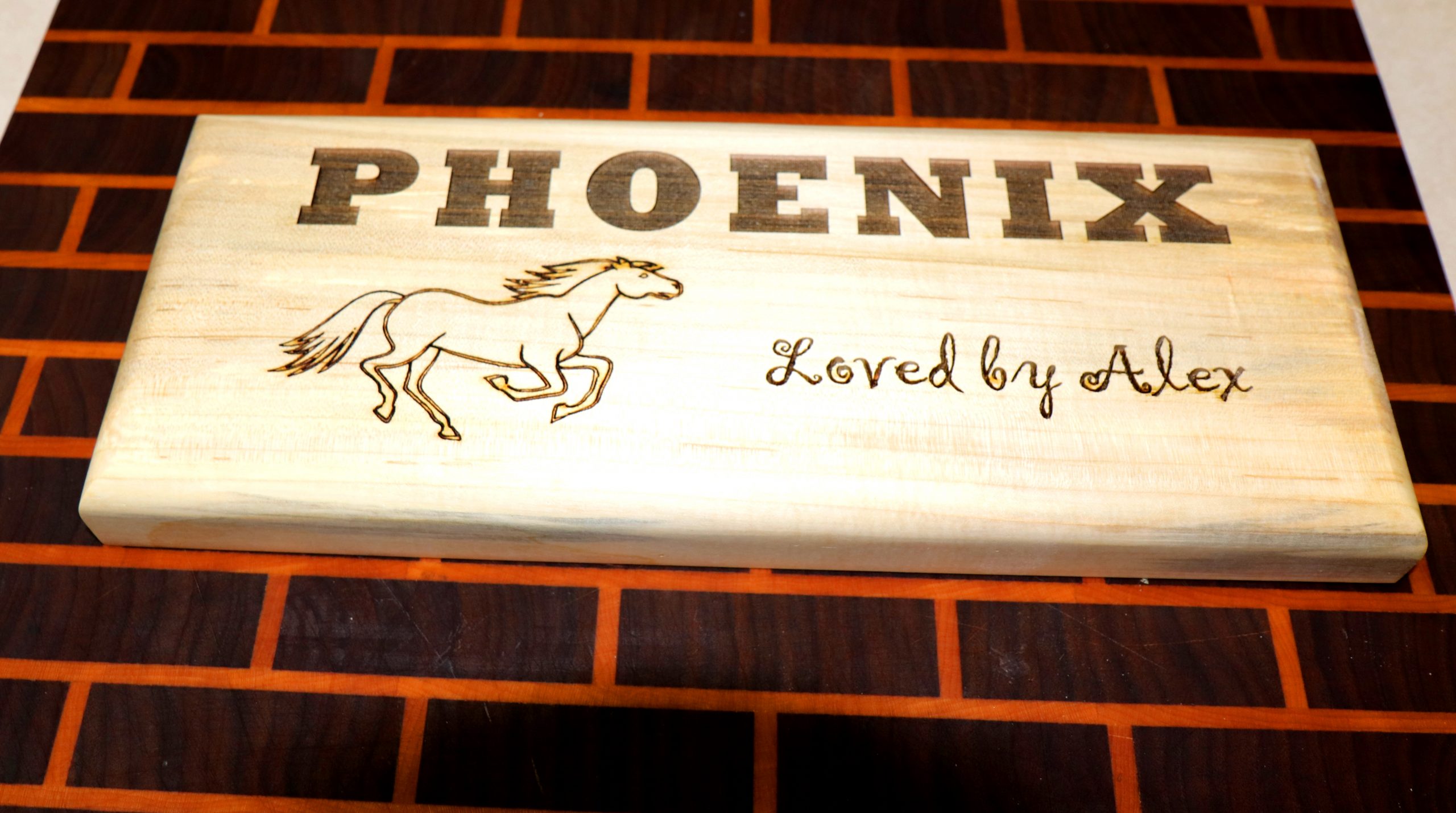 I’ve made a couple signs on wood and have been impressed by the depth of cut and the ease of incorporating lots of clip art into the projects. Sign making is now as easy as printing to a laser printer. 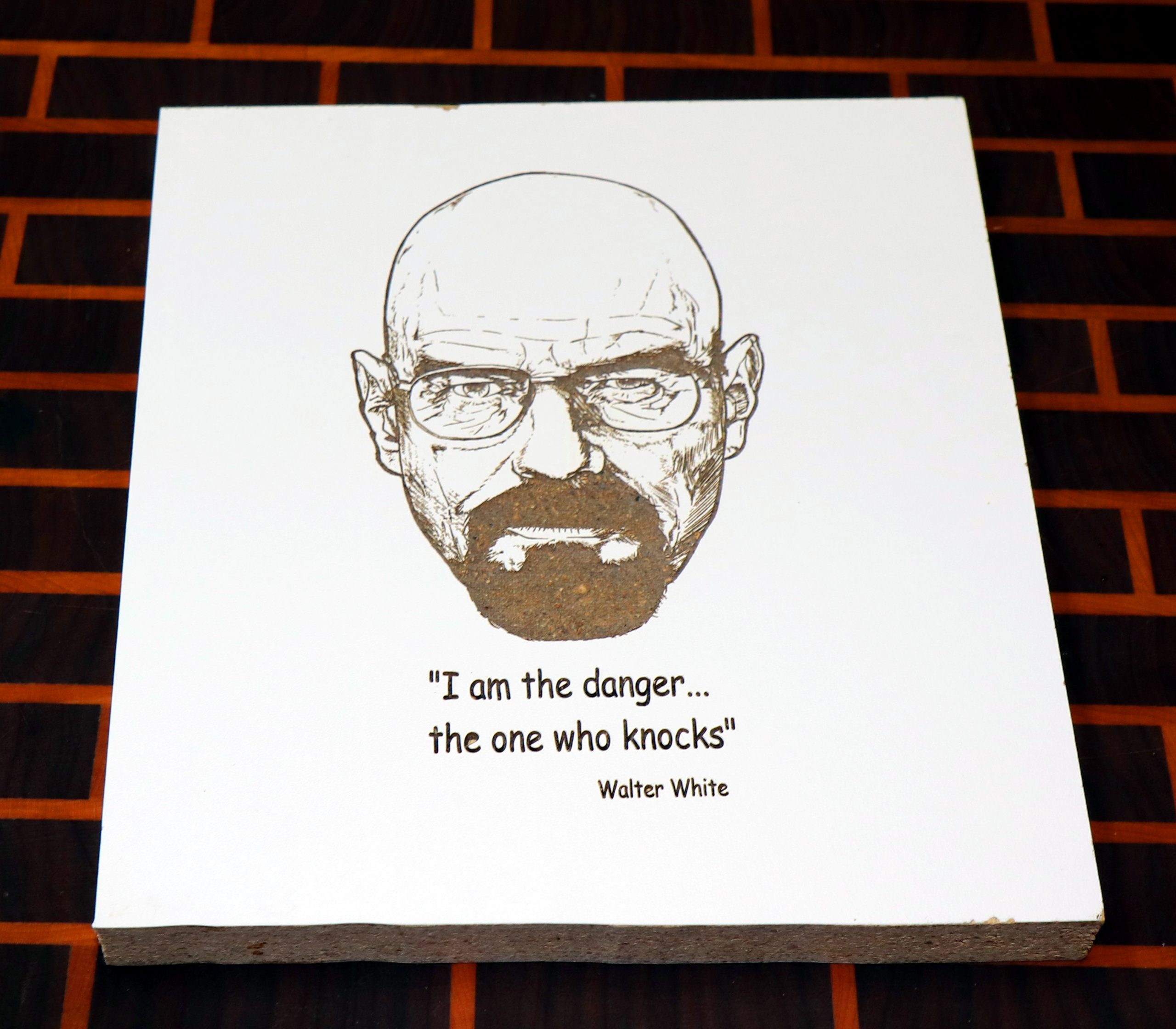 I was hesitant to even try melamine because I thought it might melt and produce a poor image, but it actually proved to be a fantastic surface for laser engraving. The bright white surface provides a stark contrasting background to the black engraved area. 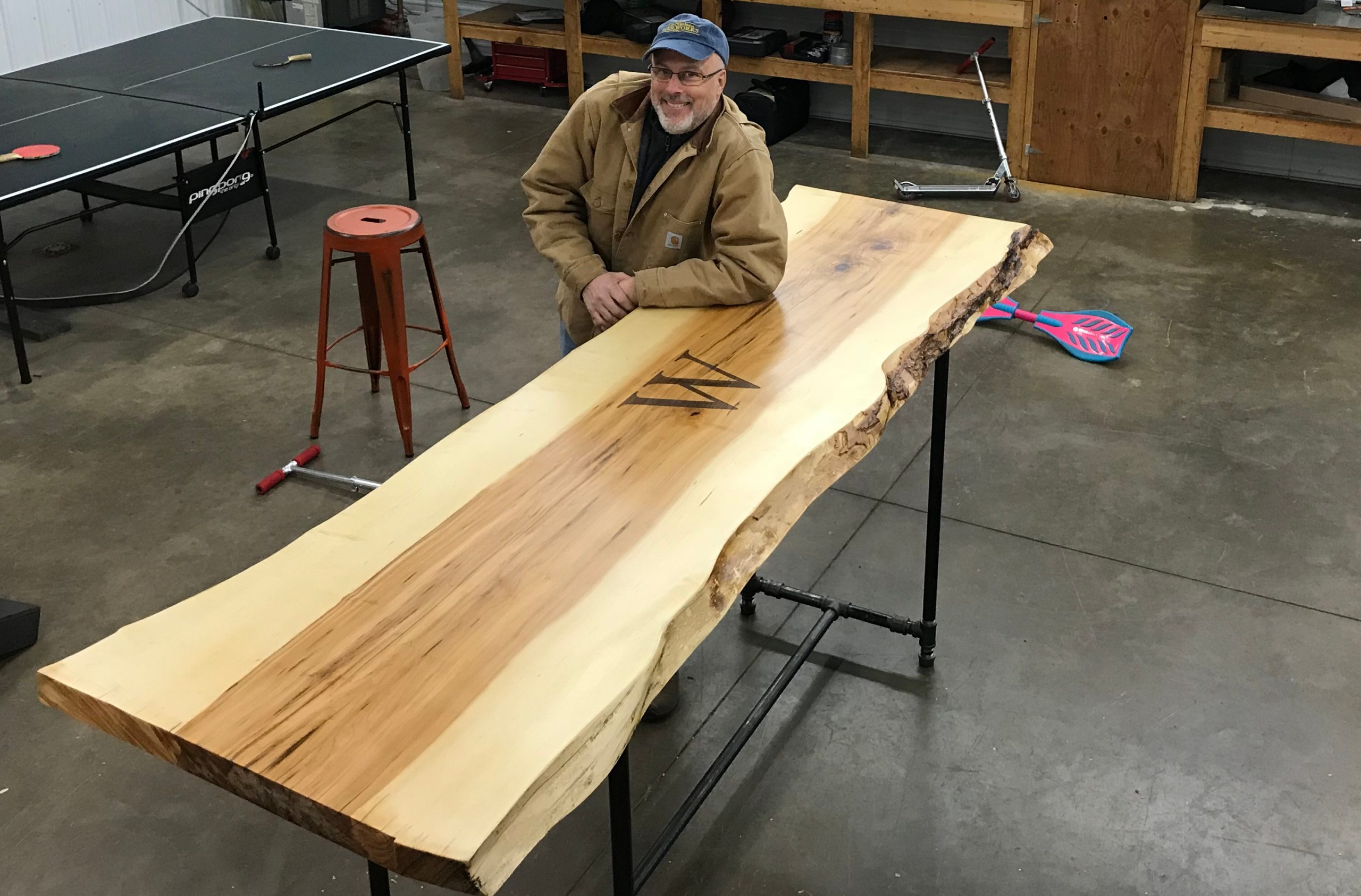 I built a live edge bar for a client and I engraved a large ‘W’ (his family name initial) into the table. This was a great way to customize this project and make it a special family heirloom. 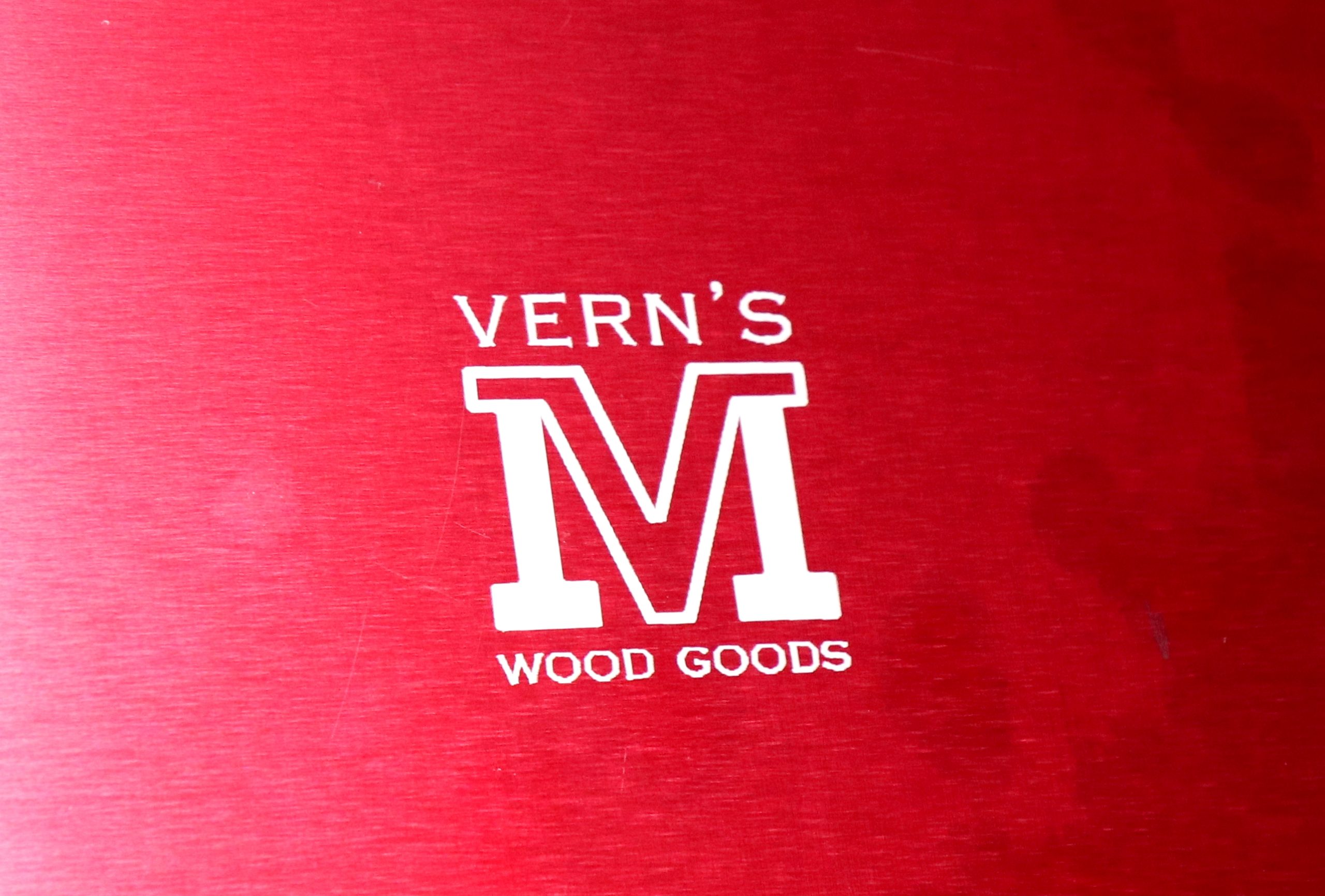 I bought a sheet of anodized aluminum and produced a few projects using that. The laser leaves a crisp line through the coated surface, producing a great image. 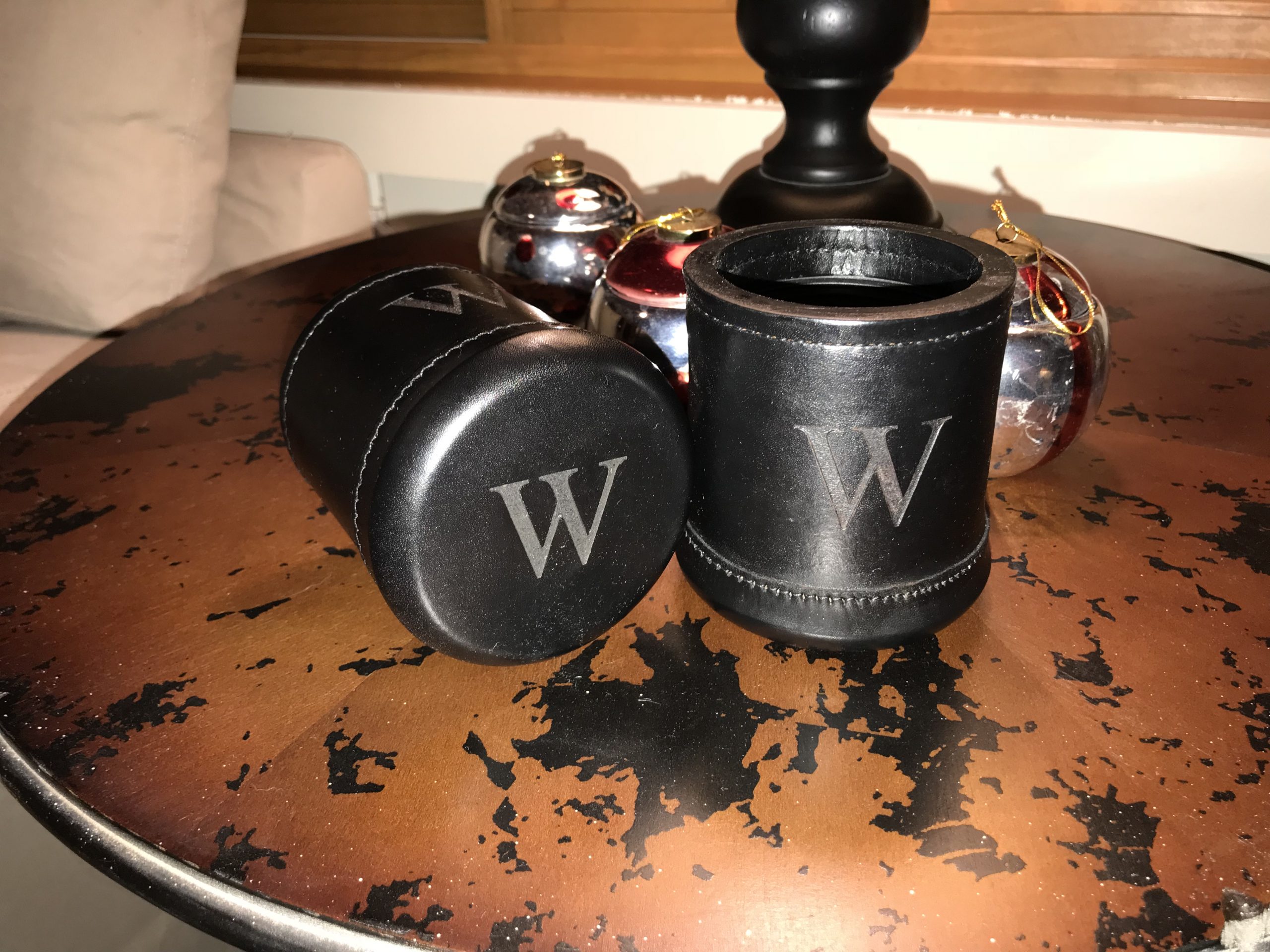 I found that the laser engraver produces a surprisingly crisp image onto leather, standing out nicely even on black leather as shown on these leather dice cups.

So now that you’ve seen some of the awesome projects you can make with a laser engraver, just exactly how do you use one? Most of the work done for a laser engraving project is done on your computer before you even step up to the machine. Depending on the manufacturer, there are a couple different approaches that are used: 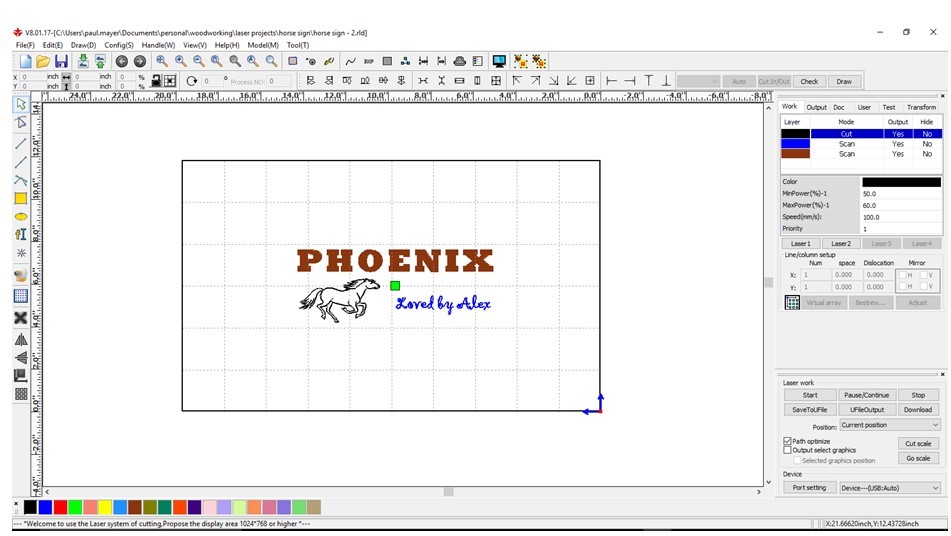 Some lasers include driver software that works like a print driver you might use on a traditional laser printer, operating as a “translator” between any application and the laser engraver. With this type of setup, you can create your layout in any application — even Microsoft PowerPoint — and then simply send the output file to the laser as you would a print job. As you send it to the laser, the laser driver pops up on the screen and allows you to configure any project-specific laser setting such as power and speed before passing the file on to the laser.

What You Need to Get Started with a Laser Engraver

First, you’ll need to choose a laser engraver. Available from a variety of manufacturers, laser engravers come in a wide range of pricing options, from a few hundred to many thousands of dollars. They range in power, which is measured in the wattage rating of the laser unit, from 30W to over 100W.

I have found that my 40W unit can do anything that I would want to do, so a higher wattage for me would just mean the ability to increase production, which might be important if you are running a business with the machine. 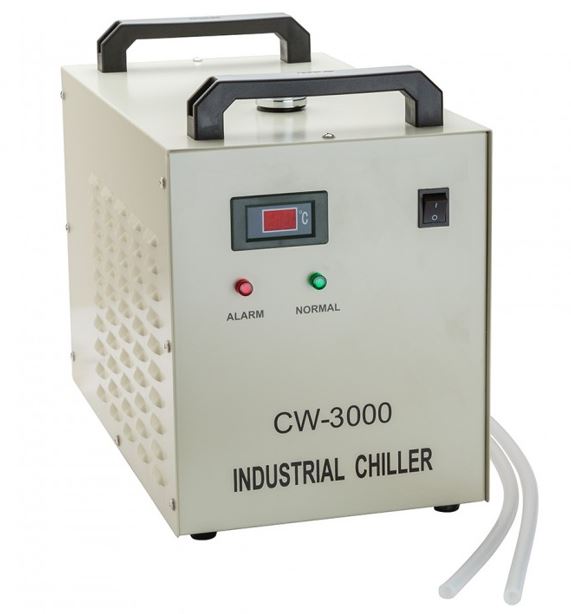 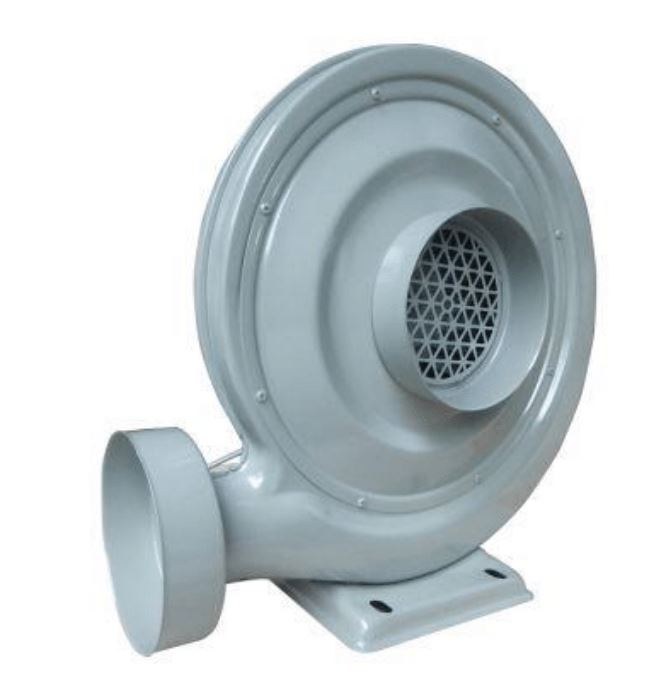 Lasers produce a lot of smoke and fumes as it evaporates material. You’ll want a system to extract fumes from the laser. You will need to route the ducting outdoors or add a filtration system that can clean the exhaust from your system. I routed mine out a window, creating a sealed baffle that I mounted to the window frame.

I look forward to years of creativity and fun projects with my laser engraver. I think of new ways to use it all the time, and who knows where this road might lead me. How about you? What would you do with a laser engraver in your shop?

Woodworking With Kids: Make A Pumpkin

End Grain Glue Myths | You May Have Misunderstood