Synopsis: Dado planes deserve a place in your tool kit, and there are plenty of vintage models around if you know how to tune them up. Here, Bob Rozaieski offers a guide to choosing a vintage plane, tuning up metal and wood-bodied planes, and using them to produce clean dadoes.

There are numerous ways to cut a dado by hand. You can saw the walls and then clean out the waste with a chisel and router plane. You can even make the joint with nothing but a sharp chisel. These methods, however, are relatively slow. While speed may be a minor concern when you need to make only a single joint, when a piece requires a dado, there tend to be several. In these situations, the most efficient method is a sharp, tuned dado plane. There’s more to learn than with some other joinery planes, but a dado plane deserves a spot in your tool kit. Be forewarned, though; it’s hard to stop at just one.

History, from wood to metal

The wooden-bodied dado plane has been around since the 18th century; however, the wooden form we know today wasn’t common until the early 19th. They were made in various sizes, typically ranging from 1⁄4 in. to 1 in. wide, in 1⁄8-in. increments, with many manufacturers also making a 13⁄16-in. size to match a common stock thickness. Compared to most other wooden-body planes of the time, which were rather simple tools, dado planes were quite complex, making them up to two times more expensive than the simpler wooden planes. Because of the cost, it was unlikely that most joiners and cabinetmakers of the time would have owned an entire set of dado planes. Instead, they may have made do with two or three.

By the 20th century, iron-bodied dado planes were being manufactured. They came in various widths similar to wooden versions but were significantly less expensive. Iron dado planes were manufactured by Stanley into the 1950s. As a result, these tools are still very common in good, usable condition.

All things being equal, I prefer wooden planes because they’re more ergonomic. This isn’t a big deal when working softer woods like walnut and mahogany, but can be quite the literal pain with really dense woods, like white oak. But, unfortunately, used wooden planes are much harder to find. It’s a good thing the metal ones function just as well.

Buying and tuning a vintage plane

As mentioned, dado planes are quite complex compared with bench and even some joinery planes. They have either two or three blades, the main blade is skewed, and there’s a depth stop. For a dado plane to work properly, all of these parts must work together.

When shopping for a wooden dado plane, first make sure the side of the plane’s body is straight. If it’s bowed, the tool will bind in the cut and will not make a satisfactory joint. One millimeter or less can be planed out, but more is unacceptable. The sole can be jointed straight and square too if it isn’t already. 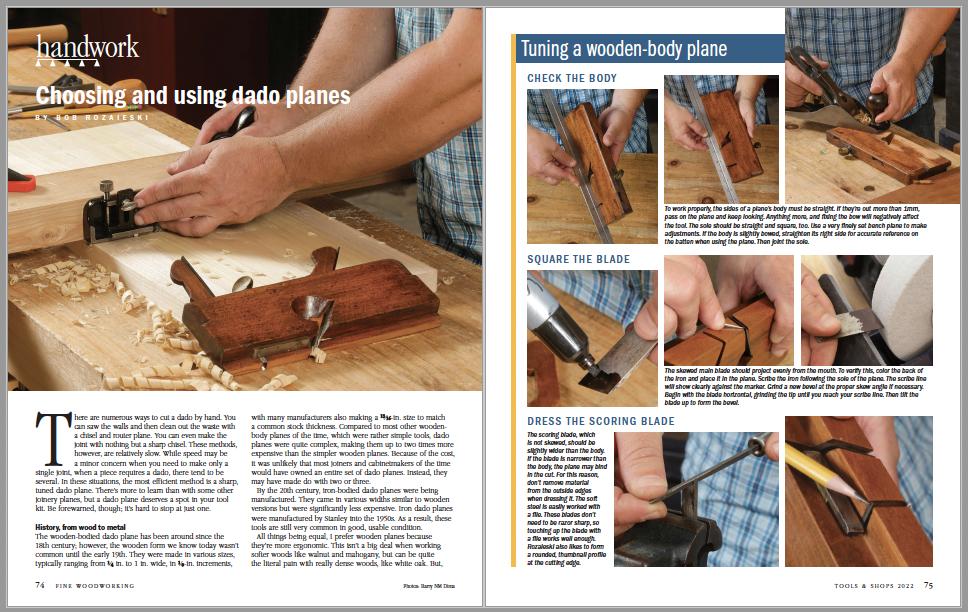 To view the entire article, please click the View PDF button below.

when you enter your email address below.